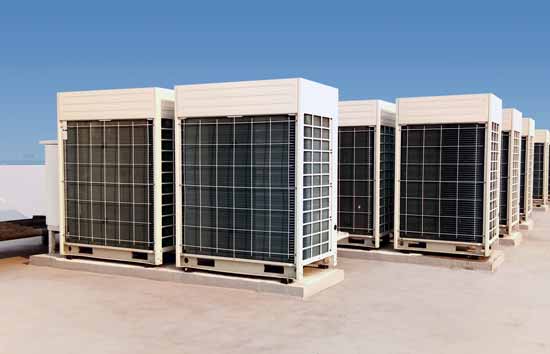 What’s an Evaporative Cooler: Everything You Need to Know

We naturally cool down with moisture. This is why our bodies perspire, with the moisture released from our skin evaporating as well as becoming a natural heat sink for our internal temperature. The same idea works with evaporative coolers. These machines function by injecting moisture into the local air that in turn condensates around us and causes the overall temperature in the air to drop. The same air pressure also pushes heat out of the room where there is venting. This kind of set up is ideal in locations that have low humidity and the potential for high temperature, like Arizona in summer for example. This is a key difference between an evaporative cooler versus air conditioners: the former is always bringing new air in while the later just recirculates the same air again and again.

The type of evaporative cooler used depends on the size of the area it needs to cool down. Evaporative units range in a number of sizes, from the smallest at 1,000 cfm to the largest being 60,000 cfm. Ideally, one should have an air circulation capability of something between 20 to 40 changeouts/hour. The fluctuation of the range is often due to the local humidity levels and temperature, which can change quite a bit from one spot to another.

Getting an Evaporative Cooler Installed

There isn’t one single standard for installation, like a system-wide AC. Folks actually choose between two approaches with an evaporative cooler, which gives one flexibility for a particular room versus an entire building. The smaller single room approach is installed with a particular localized connection. The air can then be distributed to multiple locations via ductwork. The second approach is a central location that blows air in, which then circulates through the home with ceiling fans and similar. The air itself moves around as possible versus going through specific channels and ducts.

There are also portable units. These attach to a window and blow the air right into a particular immediate location to just cool that one room down. The units are bit of a halfway approach, avoiding actual construction to the home, but they suffer in strength as a result. They have been found to be weak an ineffective in very hot locations or at summer peaks. While they have a limit, folks in milder locations find portable room evaporators to be useful when they need to drop some 5 to 15 degrees Fahrenheit for a moderate cooldown. 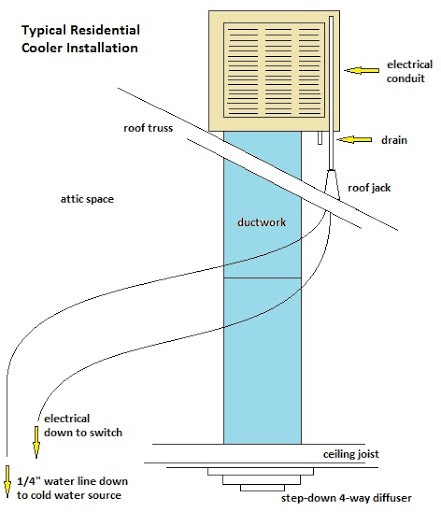 Evaporative coolers do require more maintenance than other cooling systems. Much of that is due to the fact that these units deal with a lot of moisture which tends to create sediment. No surprise then, cooling units will need a regular cleaning as well as a serious overhaul at least once every season. The exact frequency will depend on how often the unit is run. If it is only used occasionally, that will demand less work, but a unit run daily will need multiple maintenance checks and then a big purge at the end of the hot season. Simple maintenance generally involves washing out the filters and pads for sediment trapping. A full purge and overhaul will typically involve replacing all the consumables with new components.

Keep in mind where the cooler is located can affect its performance as well. Many installers recommend putting the cooler at ground level instead of on the roof where it takes the full exposure of the sun. Using a roof installation can actually make the cooler work against itself, reducing the effectiveness by at least one-degree Fahrenheit. Shaded units work far better. The roof location also makes the maintenance more of a challenge as well, and they create the potential for a roof leak.

We can also help with the customization of the design and engineering as well, giving you the extra step, you need for the right system versus settling for a generic install. Evaporative coolers have been extremely useful in Arizona and other parts of the Southwest, particularly in the summer, and we can help you switch over successfully without headaches or hiccups. Call Premier Industries, Inc. today for an evaluation appointment and review.